The higher the power gets in any inverter, the more counts every Nanohenry of inductance. To built IGBT assemblies  which are both robust and compact at the same time, every effort has to be taken to keep parasitic inductances as low  as possible. With raising current and raising frequency even the shortest distance between IGBT and its snubber  capacitor gets critical in the the end. Difficulties arise in the field of the skin effect of the current and most important the  transient voltage spikes and overshots occurring, when the transistor switches off any inductive load. 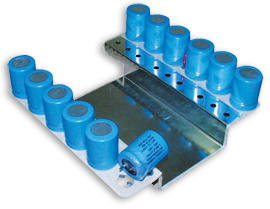 The experts of eldre would gladly help you managing the field of spreading and joining electric current in your next project. They are able to advise you how to get the lowest inductance and the lowest impedance possible. Take your advantage of laminated busbars. The construction of thin copper plates, isolated by the thinnest dielectrics possible in a multi layer layout will not only reduce parasitic inductances. The stable copper frame will help reducing costs for assembly process, as busbars allow to integrate also other electrical components like capacitors, resistors or connectors directly into the busbar. Also heat sinks may be directly integrated.

eldre busbars are a smart solution to our customers to combine a compact design layout with a very fast, simple and error free final assembly of their inverters.

More advanteges of laminated bus bars:
- higher power density due to lower security margins for current peaks
- better electromagnetic compatibility (EMC)
- improved reliabilty, no wiring errors, reduced service costs
- superior thermal characteristcs, as the thin copper busbars spread the heat together with the current. A laminated busbar can be used to optimise the cooling airflow through the complete device.

Please ask us for the eldre product catalog. We will help you with technical questions and put you in contact to the competent bus bar experts of the french ELDRE branch in Saint Sylvain.